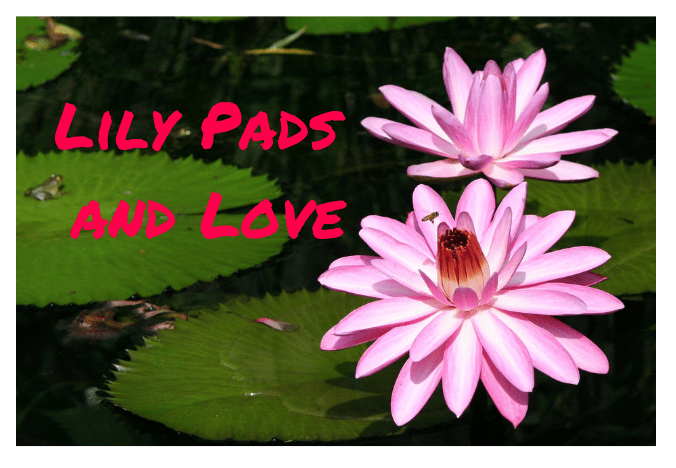 There once was a frog named Fred. More than anything else in the world, Fred enjoyed leaping on lily pads. Fred would take trips, trying to find the very best lily pads. One day, he came to what seemed to be the best pond he had ever seen. It was full of lily pads. What Fred did not know was that the pond was enchanted.
There were two very large patches of lily pads in it. One patch had pink flowers; the other purple. Fred leaped onto one of the lily pads in the pink-flowered patch. All the sudden the sky turned gray and the water black and thick. He felt hatred in his heart toward all the pond creatures. Even the bugs – that he so enjoyed eating – bugged him. Then he leaped onto one of the lily pads in the purple-flowered patches. Everything turned cheery. The sky was blue, and the water turquois and clear. Joy filled Fred’s heart, and he had nothing but love for all the creatures in the pond. He even thanked the bugs for supplying him with food.

Somewhat like the lily pads in Fred’s pond, John’s First Letter frequently presents us with two realms (1 John 1:5). One is the realm of life, light, and truth. The other is the realm of darkness, death, and lies. To live in the realm of light is to live as one who has received Christ and the promises of the children of God (John 1:12-13). To live in the realm of darkness is to continue living under the influence of the Evil One, who rules over the world (1 John 3:10; 5:19). John presents his readers with tests to help them find out in which realm they are living. The greatest test is love (1 John 3:14-15).

To say you need to love one another may seem commonsense (1 John 3:11). However, those words are easier said than done. Since Cain killed his brother in a fit of jealous rage (cp. Genesis 4; 1 John 3:12), hate has been a perennial problem. The lack of civil discourse, the tendency to replace authentic person-to-person love with supporting causes, social media algorithms that inadvertently isolate us into circles of like-minded people, all are indicators that the forces of hate are alive in our culture.

Society at large senses a cloud of darkness looming. The command to love one another is needed now more than ever. Next week we look at life in the light.