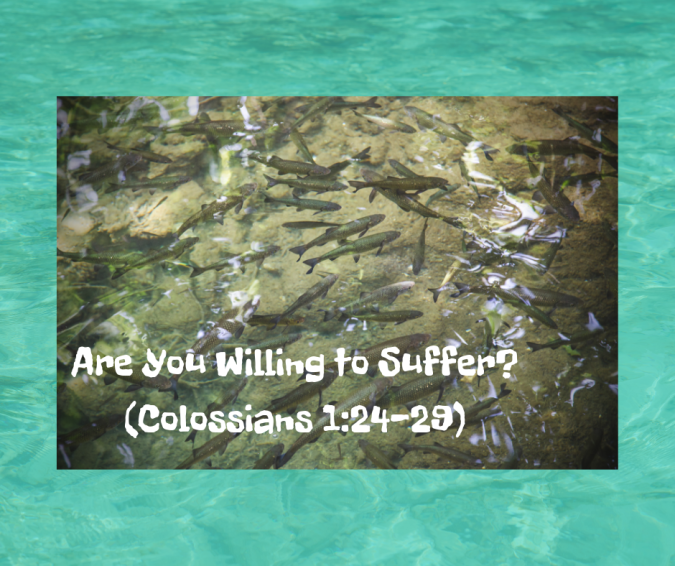 Millions of Pacific Salmon migrate from their saltwater sea home to inland freshwater streams and rivers every year. They often traverse hundreds of miles against the current, facing barriers, predators, sudden shifts in temperature, and many other obstacles to reach their destination. Many do not make it, but those who do die within days or weeks of their arrival. Why suffer such a perilous journey just to die? Pacific Salmon have been biologically programed to suffer for their species. In those freshwater gravel and rocky substrates, they lay the eggs for the next generation of Pacific Salmon. Their suffering is noble and praiseworthy.

We might call the Apostle Paul a Pacific Salmon of a man, for he was willing to suffer greatly for others. In his letter to the Colossian Christians he says, “Now I rejoice in what I am suffering for you, and I fill up in my flesh what is still lacking in regard to Christ’s afflictions, for the sake of his body, which is the church (Colossians 1:24).” Paul was willing to suffer greatly for the message entrusted to him to proclaim (Colossians 1:25-26). He suffered for the sake of others, that they might know this message.

The Christian message was never one of ease and convenience. Jesus followers often suffer much for their faith. Such willingness to suffer goes against the current of our culture. Walk into any supermarket and see the mass of individually packaged goods. Despite its impact on the environment, we rather open a package than be bothered with cleaning a dish or placing what is unused in an airtight container. Such slothfulness goes beyond our consumable goods. We want our pay, but we don’t want to work too hard for it. We want deep relationships, but not if it means having those hard heart-to-heart conversations that are inevitable when two people become well-known to each other. Sadly, we apply such a mentality to our faith. We want our faith, but not if it cost us something.

The German Christian martyr Dietrich Bonhoeffer, said in his book The Cost of Discipleship, “Suffering […] is the badge of true discipleship,” and “If we refuse to take up our cross and submit to suffering and rejection at the hands of men, we forfeit our fellowship with Christ and have ceased to follow him.”

Paul was willing to suffer – and suffer greatly – so that others may receive Christ. Are you willing to face discomfort, rejection, even suffering to do the same?