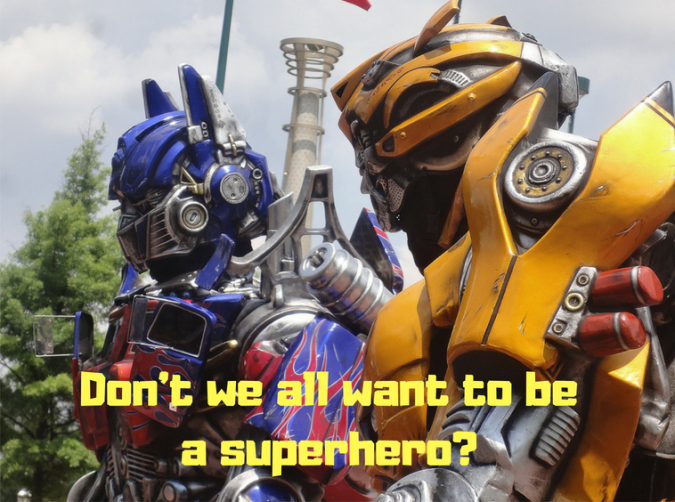 Remember Toy Story’s Buzz Light Year and his classic line: “To Infinity …and Beyond!” Somedays I want to be a superhero like Buzz. When I was an 8-year-old child growing up in Houston, Texas I was a superhero. I remember getting one of our bath towels and cloth-pinning it to my t-shirt to make a cape. I would get a garbage can lid and a stick and run up and down the drive way, jumping off the back porch. I was, at least in my mind, a superhero. I could conqueror anything.

Even now, I want control. I want certainty. I want to conqueror everything! My pride tells me I can, by being smarter or faster. Our culture has been promoting this for decades. But, as I grow in the grace of my Lord and mature in my faith, I realize that God desires me to be transformed more than informed. He even desires for me to be weak – sometimes sick – instead of being healed (cp. 2 Corinthians 12:9).

The movie Avengers: Infinity Wars is currently in theatres. It is the culmination of at least 10 previous films. Interestingly, it is not an Avengers film. Infinity Wars is the story of Thanos, the villain. Thano’s self-proclaimed mission is “murder” for the greater good. Think Hitler or Stalin. He believes that if he can kill half the population of the galaxy, he will restore balance. The Heroes in this film are compelled by this great evil to help all of humanity, often sacrificing themselves for the greater good. Humanity and The Avengers faced their finitude. They were only capable of doing so much, just as we are.

Our lives are an unfolding of a great and unending story, set in motion by our creator. Our Lord, Christ Jesus, was the greatest story teller. His parables were and are the epitome of storytelling. Fleming Rutledge in her book, The Crucifixion points out that our Lords story is not a story to be found anywhere else. She goes on to say, “In the divine invasion of this world, the Powers that have been allowed to rule in ‘this present evil age’ are disarmed by the Powers of the world to come, that is, by the weapons of the Spirit. Christ the Lord is Victor even in the midst of the suffering of his followers.” Though I may be finite, God’s grace is sufficient to win the victory.